“Again, the LORD said to him, ‘Put your hand inside your cloak.’  He put his hand into his cloak; and when he took it out, his hand was leprous, as white as snow” (Exodus 4:6 NRS). 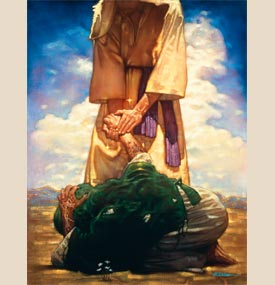 Humanity has an instant and strong reaction to skin disease.  I know, I have watched it countless times.  I have lived it.  I have watched people draw back in fear of me.  Since the age of three, I have suffered from Psoriasis.  It manifests itself as a skin disease, but we now know that it is, in fact, an autoimmune disease.  It’s genetic, and it has been the catalyst for years of pain and suffering.  Even though I am the only one of my family to ever display the symptoms, it has been passed along in my family’s genetic code, inherited and unseen, until it awakened in me.  As a young child I watched as people, children and adults, gasped and withdrew back from me.  I listened as they bombarded me with questions and even accusations about what was wrong with me.  I felt their stares, and learned to hide myself.  I hid behind clothing, hair, and closed doors.  I endured physical examinations, pokes, and prodding by countless doctors.  I have had steroid treatments, UV therapy, acid treatments, injections and creams.  My skin itched relentlessly, and when I scratched I bled and scarred.  It would begin as pink and red spots, and then turn white.  I spent fifteen out of the first eighteen years of my life hating my skin, and fearing people discovering my disease.

When I first began to read the Bible on my own, I came across all these passages about lepers.  I cannot forget reading the above passage for the first time and thinking, “My God, that’s me.  I would have been a leper.”  Up until the 1800s, Psoriasis was classified as a form of leprosy.  It was miscategorized, but that means little when people were disgusted by what they saw, not its medical classification.  My childhood Psoriasis was horrific.  There was not one part of my body, from the top of my head to my feet unaffected.  What was most affected was my mind and my self-esteem.  I hated being judged by my skin, something I could not control.  It changes you, teaches you.  I understand what my brothers and sisters in humanity feel when they suffer from Vitiligo, Eczema, Lupus, Rosacea, and even Acne.  Skin is often the first thing we see, the first catalyst for reaction.  We make judgments based upon what we see in the skin of others.  For almost half my life, I experienced much of the same disdain for my abnormal skin that people experience because of skin of a different color from the majority.  Almost two thousand years after Christ came, I was made to feel like a Biblical leper time and time again.  Then I turned eighteen, and something changed.  Perhaps it was my hormonal structure, or some other change that occurs when we enter into physical adulthood, but either way, my Psoriasis all but went into remission.  It shrank, until it was barely noticeable even to me.  Eventually it went away all together, at least on the surface.

At the end of July 1st decided to let my blog posts stop for a while.  I was stressed out and overworked.  I knew because for the first time in fifteen years I had a breakout of Psoriasis.  It had been so long that I first mistook it for a rash, an allergic reaction of some kind.  But it did not go away after a week, and then I noticed that my skin felt like it was crawling all the time.  Nothing was on me, and then I realized that my skin itched.  I felt this wave of nausea roll over me when I realized that my Psoriasis was back.  One of the single greatest triggers is stress.  Something had to give.  I had to make a change and I had to stop running full tilt all the time.  I will never forget the recollection that washed over me, and the fear that came with it.  I did not want to be a leper again.  I did not want to be judged, feared, hated, and avoided because of my skin.  I live in a society and am immersed in a culture that is hyper skin conscious.  We are willing to perpetuate evil upon another because of their skin, both in condition and color.  We shed our skin cells completely every seven days.  We are walking displays of newness and regeneration, yet we also use it as a reason to dislike and discriminate.  Some even use it as a reason for violence.  In the end, it is just skin.  I always felt like crying out as a child that “I am more than my skin, so stop judging me.”  When I made friends with people whose skin colors were vastly different from my own, I watched as people treated them horrifically because of their skin, too.  For what end?  So that someone can feel superior to another?  So that one person may oppress and lord over someone else?  My dignity and my personhood are founded deep with me, placed there by God Almighty, not dictated by the condition or appearance of my skin.  The time has come to stop being people of skin deep nearsightedness.  The time came long ago, but we resisted, rejected the word of Christ to love all people, not just those with clean, clear skin the color of our own.  The day has to arrive when we start seeing beloved children of God rather than physical states of the human body.  I have learned not to judge based upon what I see, because I have been judged.  I know that pain and the impact of that suffering.  It leaves scars that run deeper than skin, but the love and acceptance of God magnified in others heals like no other balm.  When the choice is love or loath, I will choose love every time.  Because that is all that I want for myself.

Lord, who healed the sick,

And cleansed the lepers,

Lay your hand upon me.

Heal my brokenness, cleanse me of my sin.

Help me to look beyond the surface, and search out the spark of God in all people.

May I honor the image in which each and every person was created,

By loving them and granting them grace.

In you, I find unconditional acceptance, unwavering love.

And show them that they are more than the visual projection of their form.

They are beings of sacred worth,

To be loved and celebrated.

For this brings honor and joy to you.